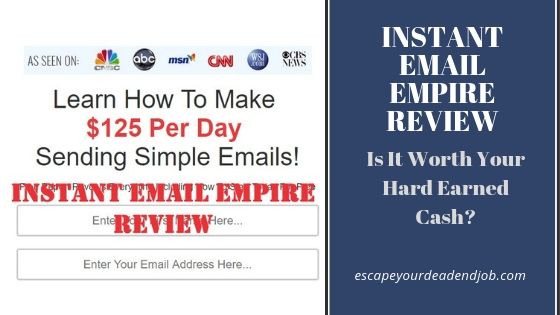 Instant Email Empire is a new Clickbank product that claims to be able to help you earn over $125 a day working for only one 10-minute session daily simply sending emails, from right at the comfort of your home. It says it can help you duplicate the success of the founder, a man who has made over $1.4 million in the last year. It all sounds great, but is it a legitimate money-making method or is it all hype? That’s what I sought to know when I looked into it, and I prepared this unbiased Instant Email Empire Review to help you figure it out for yourself. Read on to find out more.

Instant Email Empire is a Clickbank product by someone called Bobby. That’s the only name he gives. He promises that with his system, you will find out how he makes over $125 every day from sending simple emails at home. The product is a way of him setting you up to be able to do the same and split profits with him in a partnership.

The Instant Email Empire website has the same layout as many other similar money-making product sites. The most dominant element is the pitch video, which I will break down for you a little later here. Above the video at the top of the page is the bold claim that this internet millionaire will pay you $100 just to try out his free system. The product is described as a “completely done for you system.”

Below that is the promise that the product will make you $125 a day, just like it does for Bobby. Below the video is a sign-up form for your name and address, followed by a table with a list of “newest members that are making money.”

The footer of the sales page has the disclaimer. If you read the fine print, here are a few highlights that you will come across:

1. There is a statement that says that the examples shown are not indications of any success or profits in the future.

2. The company makes no guarantees that by following the advice in its content you will make any money.

You also realize that this product was initially called ‘Daily Cash Siphon.’ The owner must have changed the name and branding and forgot to change the fine print. It is also mentioned that the spokesperson in the video is using a pen name. When you do a reverse image search of the guy’s face, you will find out he is actually just a paid actor from Fiverr.

The video starts with a bunch of news headlines, all talking about working from home opportunities. If you do not pay attention, it is easy to be convinced that these headlines have been placed there to make you think that the company has been in the news, which I believe was the intention of the creator.

The spokesperson then comes on and tells you how he is going to walk you through the opportunity of a lifetime. He is going to show you how you can partner with him and start earning money immediately, all for free. He tells us his name is Bobby, and he has been working online for over 19 years. He says he now has a huge house and lots of cars, some of which he got for free by simply doing what he does. He has a beautiful family and takes vacations whenever he wants to. He says if he can be successful, anyone can too.

He then goes on to say that the secret to online success is in email. It drives sales better than any other method. The reason that he is sharing this information is because he has saturated his streams and needs to expand. By recruiting you, he can ease his own load and make some money while at it. According to him, he has a system that allows him to send out emails to millions of people every day. He only sends these emails to people who have signed up and requested to get these promotional emails.

He then goes on to explain a little about how his system works. There are a lot of people seeking internet marketing information. He has millions of people in his email list, with many more signing up every day. It is literally impossible for him to reach all these people alone. He says that since email services limit the number of people you can shoot an email to at one go, he needed to find a different way of sending out his mass emails. Since he can’t put everything in one account, he needs to divide everything up and spread it out among different accounts. This is where you come in. If he can duplicate his list and create multiple lists, he can reach many more people. When you send emails to as many people as he does, and someone else does the same thing, his reach becomes wider. He will be essentially cloning himself.

With Instant Email Empire, he helps you set up your own email account for free, then he adds subscribers to your list, also for free, before finally showing you exactly how to send the emails so that you can immediately start making money. After you start making money, that’s when you split the profits with him.

Since he can only teach a limited number of people how to do this, the number of slots available in his program are limited. He promises that when you sign up, you never pay a single dime. In fact, he will be the one paying you. He will set you up with a free account, give you the subscribers you need to get started, and only when you start making the money will you split your profits with him. All you need to do is spend 10 minutes every day sending the emails.

He then creates the sense of urgency in the viewer by insisting that if you are interested, you need to act now or risk missing out on this deal. He only has slots for 100 people. Since it is completely free, what do you have to lose?

I must admit this all sounds very convincing. The spokesperson pulls all the stops in his strong British accent to get you to sign up. However, when you submit your email address, you are immediately taken to another sales page. The video here is different, and the spokesperson has an American accent. While you could see who the first speaker was, this second video is simply a PowerPoint-style text presentation. What’s going on? What happened to immediately being taken into the program? Well, I decided to hear them out in this video too.

He talks more about what the system is and what it does, which is essentially exactly what the first guy said. Except this time, you need to “activate” your email sending account. For a one-time fee of $34. What happened to the free account? According to the spokesperson, all you have to do is pay the one-time $34 and your account will immediately start being filled with “thousands of hungry subscribers” to help you start making money immediately.

As explained in the video, the first thing you need to do is sign up with your name and email on the first sales page under the first video. You will then be taken to the next page, where you are asked to pay $34 to “activate” your account.

Instant Email Empire is simply just about email marketing. They make this pretty clear. Although the system promises to get you 5,000 emails every week, the quality of these emails leaves much to be desired. There is no way these are high-quality subscribers. Once you get started with the system, you will be asked to pay another $29 per month for Builderall, which is the platform through which you will be sending out the mass emails. You will also be asked to build a duplicate website like Instant Email Empire and promote this product through your emails.

You will get paid when someone clicks a link in the emails you sent. It’s a Pay-Per-Click system, so you get paid whether they buy the product or not. However, you will be earning only $0.20 per click. When someone buys a Builderall subscription from your recommendation, you also earn a commission on it.

IS IT WORTH IT?

If you choose to buy this product, you can make some money as a Builderall affiliate. You can also make a little bit of money on PPC promotions. Will you get the money you spent on this product back? Well, that will probably take some time. The only person who makes real money in this is Bobby.

Instant Email Empire is essentially an affiliate marketing program that leverages the power of email marketing. However, by purchasing this product, you may end up losing more money than you make. There are a bunch of upsells in the members area that you will realize you absolutely have to buy for the system to even work. For example, you cannot send the emails without paying for the Builderall subscription. When you consider the fact that Clickbank only offers a money back guarantee on the initial $34 and not on any subsequent upsells, it finally dawns on you that this product is not as free as it was advertised.

Like any other business, it is possible to make money with affiliate marketing and email marketing, but only if you stick with it. Online businesses always take time and consistent effort to build. However, is that something you can count on with Instant Email Empire? The initial version was called ‘Daily Cash Siphon’, who is to say Instant Email Empire won’t also move house once the owners get what they want? What would happen to you and all your time and money invested in this program if you tried to log on tomorrow and realized the site no longer exists? You’d be left out in the cold!

The methods that Instant Email Empire uses are sketchy at best. No one wants their email addresses to be collected and sold to third parties. When you sign up for a service, you are giving your information to that service alone, and you won’t be happy if you found out your info is being passed around to anyone willing to spend a few bucks to get it. I believe that the people Bobby is referring to as those who “want promotional emails to be sent to them” are simply people who did not read the fine print well before signing up for some random product online. In fact, all these emails you send out will likely be ending up in the spam folder.

When you combine all that with the fact that Instant Email Empire uses fake news endorsements to convince you of their credibility, a fake spokesperson, and lies about the actual price of what they are trying to sell you, you get a product that practically screams about how the people behind it are only out to get your money.

If you want to be an effective email marketer, you need to learn to do it right. Start from the ground up and give your audience the value they deserve. Do not hit them with daily spammy promo emails. If you do this, all your high-quality subscribers will stop opening your emails and unsubscribe from your service. Like any other business, the best way to actually be good at it is to build it from the ground up, learning and implementing new things as you grow.

CLICK HERE FOR MY #1 RECOMMENDED METHOD TO MAKE MONEY ONLINE!

Either way, I’ll let you make up your own mind on what you want to do. I hope this Instant Email Empire review helps you reach a wise decision.